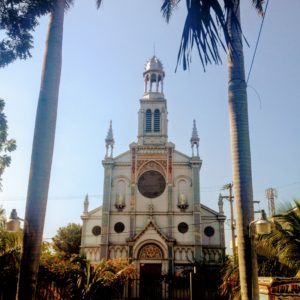 Founded in 1912, the BHFIC is one of the oldest active libraries in Haiti and holds an invaluable collection of historical patrimony. Its facilities were damaged during the 2010 earthquake and underwent minimal repairs. The library director, Mme. Guillaume, has been dedicated for years to preserving its unique collection. This EAP grant builds on years of collaboration between Guillaume and the Digital Library of the Caribbean (DLOC) and will allow the library to expand its digitization capabilities. Guillaume and the team hope this will lead to more collaborations to preserve Haiti’s rare archival materials, which are imperiled due to the country’s vulnerability to natural disaster and lack of infrastructure.

The grant will be devoted to preserving ninety-one different newspapers from the 19th and early 20th century, many of which are available nowhere else in the world. Library staff have identified these publications as among the most vulnerable in the archive. Collectively, they document a period in Haitian history that many scholars have yet to explore, precisely because of the dearth of materials and limited access to existing sources. These include publications such as Le Télégraphe (1813-43), Feuille de Commerce (1827-60), and an extensive range of shorter-run newspapers. The material encompasses sources printed in the capital, southern towns, and other sites. Once digitized, these newspapers will be available onsite and online for free via DLOC and the British Library.

For the past 12 years, the British National Library’s Endangered Archives Programme has offered competitive grant awards to researchers around the world seeking to collaborate in the preservation of endangered archival collections. This work has been made possible through generous funding by Arcadia. The goal of these awards is identify, protect, preserve, and digitize material that is in danger of deterioration, destruction, or loss, and to make these collections available locally and worldwide. The Programme has successfully contributed to preservation in Mali, Indonesia, and Italy (see map). This is the first EAP grant afforded to a Haitian repository.

Anne Eller is an Assistant Professor of History and an affiliate of Spanish and Portuguese at Yale University and a historian of the post-emancipation Caribbean, with a focus on the Dominican Republic and Haiti in the nineteenth-century. In her first book, We Dream Together: The Dominican Republic, Haiti, and the Fight for Caribbean Freedom (Durham: Duke University Press, Dec. 2016), she explores the common history of Dominican and Haitian struggles for autonomy in the first decades of national independence.

Claire Antone Payton is a Fulbright scholar and doctoral candidate in the History Department at Duke University. She is completing a dissertation on the history of Port-au-Prince under the Duvalier regime. She is also the creator of the Haiti Memory Project, an online oral history collection of first-person accounts of the 2010 Haiti earthquake and its aftermath. Her scholarship is published in the Oral History Review and NACLA Report on the Americas.

Erin Zavitz is an Assistant Professor of History at the University of Montana Western. She holds a PhD (2015) in history from the University of Florida. She focuses on 19th and 20th century Haiti, in particular, the construction of Haitian national identity. She is currently working on a manuscript project entitled “Visions of Haiti’s Past: Commemorations and Representations of the Haitian Revolution.” Her research has received support from the American Philosophical Society, the Dan David Foundation, the New York Public Library, and the Chateaubriand Social Sciences and Humanities Fellowship.

Lewis Clorméus is a professor at Université d’État d’Haïti, where he works on the relationship between the state and religions in Haiti, religious history, and the intellectual history of Haiti (19th and 20th century). He has published two books on 19th-century intellectual thought on Haitian Vodou, including Duverneau Trouillot et le Vodou (Educavision, 2016). Currently, he is working on an account of the history of Protestantism in Haiti before 1915.